The Caribbean Community (CARICOM) staged its Side-Event at the UN Oceans Conference in New York, Wednesday, with a strong focus on networking and collaboration to help the region achieve its sustainable development goals.

The event, titled “Ocean Governance and SIDS Sustainable Development”, was convened as a partnership involving CARICOM Member States, led by Barbados and Belize; CARICOM Institutions led by the University of the West Indies (UWI); and the CARICOM Secretariat.

The event had as a second goal, cultivating inter-regional collaboration among Small-Island and Low-lying Developing States (SIDS).  To this end, it was an engagement involving CARICOM, the Pacific Island Forum and the Indian Ocean Commission.

“The CARICOM region in the lead up to and follow up from the Samoa Conference have prioritized the intra and inter-regional collaboration amongst SIDS to advance the SIDS development agenda,” CARICOM Secretariat’s Assistant Secretary-General Dr. Douglas Slater said in welcoming remarks.  “We have tried with this event to demonstrate both.”

He said the intra-regional approach, involving Member States and Institutions, was key to insuring implementation of the SIDS agenda for Sustainable Development especially in a region where human and financial resources are often scarce.

“As such we are using this platform – the Oceans Conference – as a first step to what we hope will be many engagements between ourselves, the Pacific Island Forum and the Indian Ocean Commission, to advance the SIDS collectivity,” Dr. Slater said.

CARICOM has argued that despite longstanding recognition that, to be effective, oceans governance arrangements must be integrated across sectors and at all levels, from local to global. It has however noted that governance arrangements remains fragmented and ineffective. As an example, it noted that bio diversity, fisheries, pollution and climate change have 23 global and 120 regional agreements. CARICOM’s position is that these global and regional networks, if rationalised, connected and strengthened could provide a working global ocean governance framework for oceans that will enable achievement of the SDG 14 targets. 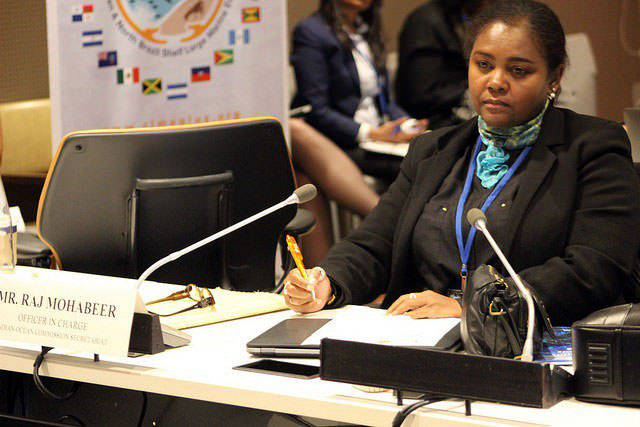 Ms Jeana Bond, Officer in Charge of the Indian Ocean Commission, with responsibility for environment and climate, represented her Group at the CARICOM side event and signalled their own strong interest in inter-regional collaboration.

“We have arrangements to strengthen regional and inter-regional cooperation, getting institutions networking and sharing, as well as exploring areas for collaboration,” Ms Bond told the meeting.

“We continue to deploy our best efforts at finding common ground to effectively manage frameworks,” she told the meeting.

“We therefore see SDG 14 as an opportunity to further embed and strengthen regional ocean governance to ensure effective implementation of goal 14, but more crucially to use the current international dialogue on the world’s ocean to progress an already ambitious regional agenda for it and for our very special chunk of the Pacific Ocean that we have stewardship and custody of. And we trust that this first Ocean Conference is such an opportunity to pursue and solidify these efforts and to share  best practices between our Regions which should and must continue inter-sessionally for years and for decades to come”, she added.

The Barbados Minister of Foreign Affairs and Foreign Trade Senator Maxine McClean chaired the event which also received remarks from the Minister of Sustainable Development from Belize Mr. Omar Figueroa.  UWI was represented by Professor Robin Mahon, and there was a presentation from Mr. Patrick Debels of the UNDP/GEF/CLME+Project who announced the launch of a partnership for the wider Caribbean Region which involved a large marine ecosystem project.

The UN Ocean Conference, being held from 5 – 9 June at the UN Headquarters in New York, was organised to support implementation of Goal 14 of the 17 Sustainable Development Goals, part of the 2030 Agenda for Sustainable Development, adopted by world leaders in 2015.  The main outcome will be a Call For Action to conserve and sustainably use the oceans, seas and marine resources for sustainable development.