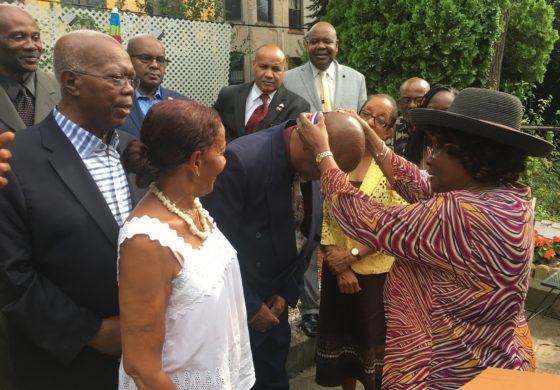 [July 23rd, 2017 – St. Lucia Times] – The Caribbean American Chamber of Commerce and Industry (CACCI) has made Castries Mayor, Peterson Francis, an honorary member. According to a release from the Mayor’s Office, Francis was made an honorary member of the CACCI at a special meeting of the organization while he was on an official visit to New York.

Francis said he was very proud to accept the first ever “honorary medal” given to a Caribbean Mayor and looked forward to a growing partnership with the chamber. “This Honorary medal will forge the long-term partnerships for progress between the Caribbean American Chamber of Commerce and Industry and Saint Lucia, which we expect to be quite fruitful,” the Castries Mayor said. He expressed the view that the time was ideal for a marriage between the New York based CACCI and the Office of the Mayor  of Castries so that the City of Castries can benefit from new business opportunities. Francis observed that Saint Lucians can also take advantage of the  business model of the  CACCI. “This is about partnerships. This is about working together,” Francis asserted. CACCI President Dr. Roy Hastick promised to work with the Castries Mayor and his team and partner in key areas so that Castries and Saint Lucia would benefit.

Prior to receiving his medal, the Castries Mayor held talks with the CACCI on several matters. They included : micro-funding for vendors and entrepreneurs, the twinning of Castries and Brooklyn, improving the business climate in Castries and exporting  bananas to the USVI and banana ketchup to New York. The CACCI, founded in August 1985, is a New York statewide membership organization which has developed expertise in helping  small and start-up business owners in areas of planning, financing, certification, procurement, expansion, and exporting and importing.