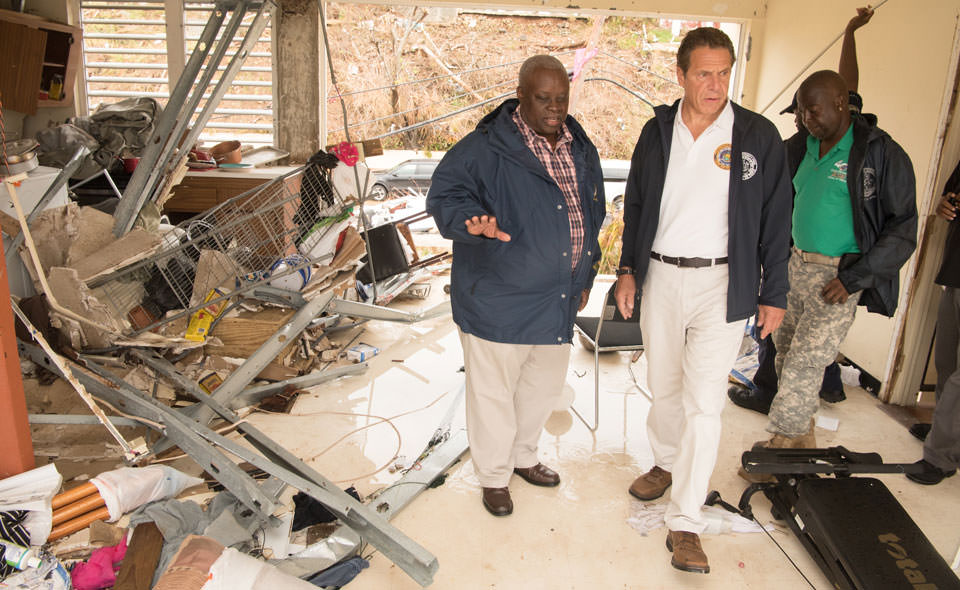 Team Deployed at the Request Of Governor Mapp

Photos of the Governor’s Assessment Tour Are Available Here

The team is being deployed at the request of Governor Kenneth E. Mapp, who also requested that Governor Cuomo travel to the region to survey the damage. Governor Cuomo traveled to the region today, touring damage at the Estate Tutu Apartments on St. Thomas, visiting a supply distribution center and meeting with Governor Mapp and senior officials at the Government House. Hurricane Irma hit the U.S. Virgin Islands on September 6th, leaving St. Thomas and St. John heavily damaged after powerful winds at speeds greater than 150 miles per hour. Much of St. Thomas and St. John has been devastated and still remains without power as residents struggle to recover from the storm.

“After seeing the extent of Hurricane Irma’s devastation, I am deploying additional resources to support the U.S. Virgin Islands on the long path to recovery. New York State will send National Guard and State Police personnel to assist in the recovery efforts and lend a helping hand,” Governor Cuomo said. “New Yorkers know first-hand the damage Mother Nature’s fury can cause, and we are proud to be providing expertise, equipment, and personnel to support the U.S. Virgin Islands on their path to recovery, because helping neighbors in need is the New York way.”

The team will bring 12 Humvees and six all-terrain gator utility vehicles to augment security on the island. While deployed to St. Thomas, they will be housed on board the SS Wright, a federal Department of Transportation response vessel.

The 105th Military Police Company is based at the Masten Avenue Armory in Buffalo, and the soldiers are trained in law enforcement and security missions. The team will deploy from Niagara Falls Air Reserve Station on board three C-17 Globemaster III cargo aircraft. Members of the 105th Military Police Company deployed to Iraq in 2004 and 2011 and deployed to Guantanamo Bay in 2015. They have been involved in the response to the November 2014 snow storm in Erie County and other state emergencies

New York and the U.S. Virgin Islands share a special connection. More U.S. Virgin Islands residents list their place of birth as New York than any other state in the nation. Governor Mapp was born in Brooklyn, New York, and attended both New York City Community College and the City University of New York.

This deployment is not the first assistance offered by New York to the U.S. Virgin Islands in the wake of Hurricane Irma. Since Hurricanes Harvey and Irma hit Texas, Florida and the Caribbean, New York state has continued its support to areas impacted by these storms.

New York has a long history of helping other states following natural disasters. In addition to sending similar assistance to Florida following Hurricanes Matthew, Frances, Ivan, and Dennis, New York dispatched a multi-agency team of more than 300 individuals to assist Louisiana following Hurricane Katrina, as well as another 18-member team after Hurricane Gustav. Additionally, New York has sent crews of firefighters west many times to assist with containing wildfires.