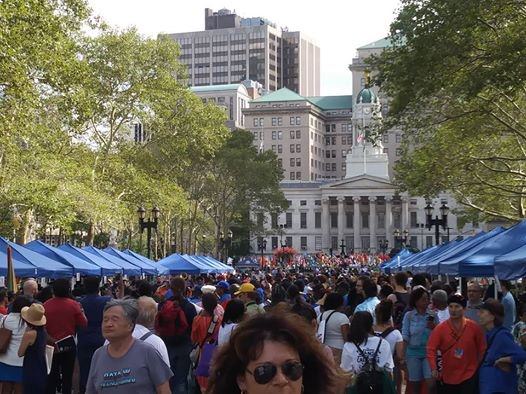 A MULTICULTURAL DISPLAY OF DIVERSITY LED BY UNITY PARADE OF FLAGS

By Angello Bernard -July 26, 2017 – Brooklyn Borough President Eric L. Adams announced that he will proclaim Sunday, August 6th to be “International Day of Friendship” in Brooklyn, as part of his fourth annual celebration recognizing the hundreds of cultures and ethnicities that make Brooklyn an unparalleled center of diversity. As the signature event in Borough President Adams’ “Embrace Your Hyphen” campaign celebrating Americans who honor their various heritages, the day will consist of a series of cultural identity-oriented festivities that begin at 1:00 PM with a Unity Parade of Flags, featuring the flags of 195 nations marching down Fulton Street from its intersection with Flatbush Avenue toward Brooklyn Borough Hall. Following the parade, which will include New Yorkers from more than 80 countries as well as dancers, drummers, and stilt walkers, the festivities at Brooklyn Borough Hall and Columbus Park will run through 5:00 PM and feature a series of artistic and cultural performances from a wide variety of groups represented in the borough, as well as a taste of ethnic cuisine from an array of local food trucks. Borough President Adams highlighted the important symbolism of International Day of Friendship as Brooklynites come together to celebrate diversity.

“Our diversity is our greatest strength as Americans, and that’s what International Day of Friendship is all about,” said Borough President Adams. “Our borough is made up of a beautiful mosaic of customs, faiths, languages, and personal stories of perseverance. This celebration is all about bringing people together so that we can all appreciate our differences, learn from them, and embrace our own and other hyphens, from Dominican-American and Italian-American to Japanese-American and Nigerian-American. I invite everyone to come join me to celebrate One Brooklyn.”

For the first time, Borough President Adams’ International Day of Friendship celebration will present a Global Village, including tents from countries around the world showcasing their cultures, cuisines, and customs; featured nations will include Australia, Azerbaijan, Belarus, China, Egypt, Mongolia, the Philippines, Poland, South Africa, and Tanzania, as well as regional displays on the Caribbean and Oceania. Visitors will be able to have an interactive experience in each of these tents to feel, hear, and see unique cultural artifacts and stories. A cultural conversation, entitled Brooklyn Fusion, will also take place midway through the program; NY1 anchor/reporter Jeanine Ramirez will moderate a robust dialogue featuring various immigrant New Yorkers offering their perspectives on how they have kept their culture alive, while assimilating to American life.

“Delta is proud to support Borough President Adams’ 4th annual International Day of Friendship, celebrating all the diversity the borough has to offer,” said Henry Kuykendall, New York vice president of Delta. “Delta’s over 10,000 New York-based employees are your friends and neighbors, and we’re proud to serve more than 130 cities around the globe from this city we all call home.”

“We are enthusiastic to participate in, as well as help sponsor, Borough President Adams’ annual celebration of Brooklyn’s diversity,” said Ana Oliveira, senior vice president and regional manager of Investors Bank. “Our team is eager to see our friends from neighborhoods across the borough as well as meet new people during this fun, summertime event. We invite everyone who attends the International Day of Friendship activities to stop by our table, say hello, and find out how our bank can serve you, your family, and community.”

“We’re so pleased to support Brooklyn’s International Day of Friendship as it unites and celebrates the diverse culture of the borough,” said Fred Dixon, president and chair of NYC & Company Foundation. “Our visitors from around the world flock to experience the unique communities of Brooklyn, and it is with initiatives such as this that proves the borough is so proud and welcoming.”

“MetroPlus Health Plan is proud to support the International Day of Friendship celebration and Borough President Adams as we salute the diversity of Brooklyn, where nearly one-third of all residents are foreign-born,” says Gail L. Smith, chief customer officer of MetroPlus. “We are many, but we are always one, when we embrace and celebrate our differences, as we do each International Day of Friendship.”

“International Day of Friendship aligns with Target’s core values of celebrating diversity and inclusion,” said Kelly McGarrity, New York Metro community captain for Target. “Target is proud to support Borough President Adams and celebrate the ‘hyphen,’ which is what makes this borough so unique and exciting!”

“The family of Bed Bath & Beyond stores at Liberty View in Sunset Park is thrilled to be part of Brooklyn’s International Day of Friendship,” said Bari Fagan, director of brand integration, video, and promotions for Bed Bath & Beyond. “We’re happy to partner with our new neighbors.”

“We’ll be cooling down attendees with our freshly-spun frozen custard and Shack-made Lemonade,” said Andrew Davis, Downtown Brooklyn senior general manager for Shake Shack. “Shake Shack is fundamentally a community gathering place, so being a part of this awesome event really speaks to our DNA.”

As with previous years, Borough President Adams will cap his International Day of Friendship celebration with a mass singing of “We Are The World.”